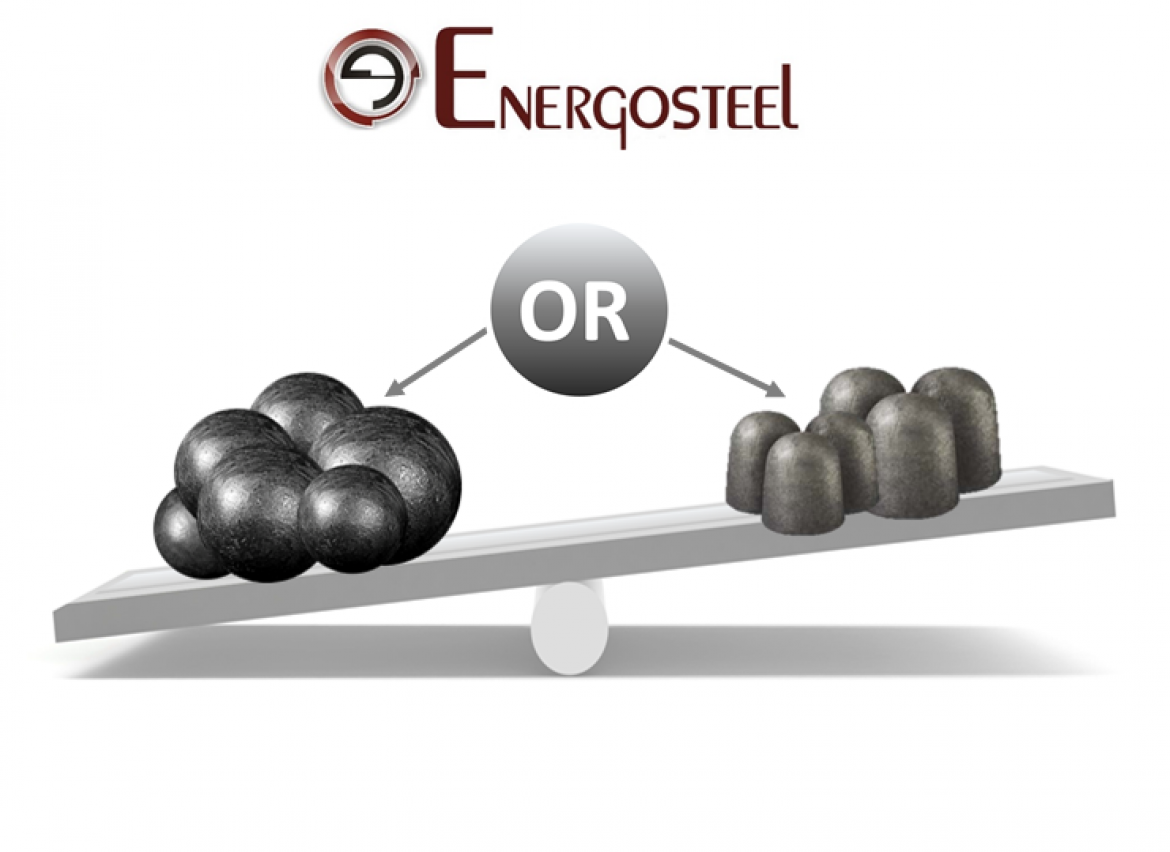 We have repeatedly given evidence that the use of grinding balls in grinding material is more effective than the use of a cast iron cylpeb.

Since we have a semi-industrial mill, we decided to conduct comparative tests. The subject of comparative tests were two types of grinding media: ukrainian production cast-iron cylpebs 27 * 32 and steel grinding ball 30mm produced by Energosteel.

The purposes of comparative tests are:

Comparative tests of grinding media were carried out in a semi-industrial two-compartment mill which is installed directly at the plant “Energosteel”. The inner drum of the mill consists of two equal chambers, separated by a partition wall without openings. The rotational speed of the mill drum is 45-51 rpm.

Material was crushed simultaneously in two chambers of the mill. Each chamber was loaded with 25 kg of grinding media. Before loading, the entire assortment was weighed and the average diameter of the grinding media was determined. Quartz sand with a grain size of 1.1-1.3 mm was used as the grinding material. Grinding was carried out in a closed cycle and dry method. The duration of one cycle was 3 hours. In each separate cycle the mill grinded 20 kg of sand in each chamber. At the end of the cycle, the milled material was extracted from each chamber. A sample of 2kg was taken, which was further sieved through a 009 sieve. The product on top of the sieve was weighed and the percentage of residue on the sieve was determined. Also at the end of the cycle from each chamber were randomly selected 20 units of each type of grinding media, which were weighed and measured. After the measurements were taken, the selected samples of grinding media were returned to the mill. The total test duration was 150 hours.

All data that have been obtained or mathematically calculated will be presented in the form of summary tables for clarity.

Table 1. Initial and final measurements of the parameters of the grinding media

So, the steel ball was less affected by abrasion than the cast-iron cylpebs. All grinding balls abraded evenly and did not lose their geometric shape after 150 hours. Let us note that, that numerous cavities (“shells”) in cast iron led to the fact that the data on measurement of cylpeps weight are a little distorted, because ground material was clogged in the mentioned cavities and, therefore, the weight is overestimated.

Let’s look at the indicators of grinding quality.

Table 2. Average data on the sieve analysis of samples for 50 cycles (150 hours) of grinding.

As can be seen from Table 2, the indicator “residue on the sieve” in the steel ball is lower, therefore, the grinding quality when using grinding balls is more effective than when using a cast-iron cylpebs.

Given the results of the comparative tests, we can say that the use of steel grinding ball with a diameter of 30 mm is more effective than the use of cast-iron cylpebs under similar conditions. Thus, after 150 hours of work, the steel ball decreased in geometrical dimensions by 0.30 % (the zilpebs by 1.29 %), and the weight of the steel ball decreased by 0.89 % (the zilpebs “lost” 3.86 %). In this case, the average residue on the sieve 009 when grinding the material with a steel ball was 13.95%. The same indicator when using a cast-iron cylpebs was 15,56%.

We understand that grinding conditions are individual for each plant, and it is impossible to claim for 100% that a ball is more efficient than a cylpeb. Nevertheless, the results of this test proved once again that grinding balls have a number of advantages over cast iron cylpebs. We hope that our research will help you take the first step towards improving the grinding process in your plant.